Congrats to the winner of the Harley-Davidson golf car!

Seymour Port was recently thinking about that raffle ticket he bought in May to help the charity named for longtime friend and Ocean Lakes' teammate, Marti Parnell.

As it turns out, he was the winner.

Seymour’s ticket was drawn from a mound of raffle tickets Monday afternoon, making him the winner of the custom Harley-Davidson golf car once owned by Ocean Lakes' co-founder Nelson Jackson. 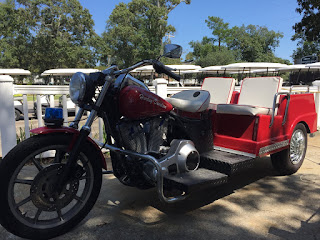 The golf car was the prize for a raffle to raise money for Marti’s Wish, which aims to raise awareness and possible research of Signet Ring Cell Carcinoma of the stomach. The effort is named after Marti, a teammate at Ocean Lakes for 36 summers who was diagnosed with the disease and passed away last year.

Seymour, who lives in Little River, had known Marti for 20-plus years and was a pallbearer at her funeral. Helping his friend’s cause was his priority when he bought the $5 raffle ticket. Winning? Well, that’s just a bonus.

“Did I really?” Seymour said by phone Monday afternoon after learning he won the golf car. “Well, I’ll be. I’m tickled that I won.

“I’m sure Marti’s looking down on me saying, “See what I did for you?’” he said.

Many of our longtime guests knew Marti, who worked in the Main Office for more than three decades welcoming visitors to Ocean Lakes Family Campground and to the Myrtle Beach area.

The golf car raffle raised roughly $8,000 for Marti’s Wish, Greg said, adding that the final total is still being calculated.

“This is going for a great cause,” he said before a park guest picked the winning ticket from a bucket full of entries.

Ocean Lakes also raises money for Marti’s Wish with “dress-down days” a couple of times every month, allowing teammates to donate to the cause in exchange for wearing an outfit of their choice instead of the Ocean Lakes uniform that day.

Because of Marti’s Wish, education and awareness of this rare form of cancer is being pursued by the Hollings Cancer Center at the Medical University of South Carolina under the direction of Dr. Carolyn D. Britten.

Learn more about Marti’s Wish and how you can donate here.
Posted by Ocean Lakes' Team at 5:09 PM