Folks headed to Ocean Lakes to celebrate July Fourth are in for one of the most fun, festive weeks of the year.

From our annual Patriotic Golf Car Parade to the Salute from the Shore military flyover along the beach, the week is jam packed with patriotic events and America-themed activities so everyone has a chance to show off their red, white and blue. There’s a reason this holiday week gets booked up months in advance. 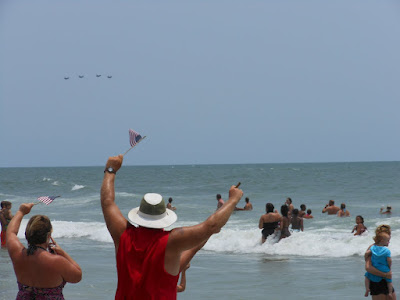 “You can’t beat July Fourth at Ocean Lakes,” said Salle Horner, Sandy Harbor and Recreational Activities Coordinator. “The spirit of America is displayed everywhere you look – from the decorated campsites to the decked-out golf cars. It just doesn’t get any better.”

We have patriotic parades on four wheels, two wheels and four paws, as well as a contest for the best decorated site.

Here’s a rundown of the info you need to know to make the most of your July Fourth stay with us, including details on the holiday’s biggest events, highlights of other holiday-themed activities and reminders of some Ocean Lakes rules (no fireworks or sparklers allowed in the campground!).

Fun on the Fourth

Activities run all day and well into the evening.

Here’s a rundown of some of the must-see events and activities:

Patriotic Golf Car Parade
When | 3 p.m. Tuesday, July Fourth, lineup starts at 2 p.m.
Where | Lineup along Sand Dune Drive at Gull Drive, parade starts on Ocean Lakes Drive at Sand Dune Drive in front of the big Sandy. Use Salt Works Road to get your registered golf car in the lineup on Sand Dune Drive
Tip | Want to participate in the parade? You MUST pre-register before 1 p.m. July Fourth. That gets you the number to display on your golf car; you won't be able to line up to participate in the parade without that number. Simply swing by the Recreation Center to register! Prizes will be given out for Most Patriotic, Most Creative, Most Attractive and Best Overall. 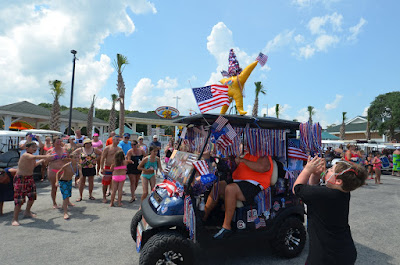 The Patriotic Golf Car Parade has been an Ocean Lakes July Fourth tradition for decades - longer than anyone can remember. Our founders Nelson and Mary Emily Jackson, both of whom passed away in 2010, loved this event and could always be spotted leading the parade.

More than 300 golf cars participate in the parade, which starts on Ocean Lakes Drive near Sand Dune Drive then snakes through the campground.

Be prepared to see golf carts masked in everything America, with guests kicking their creative decorations up a notch every year aiming to take the prize for the most patriotic display.

“Guests go over the top – American flags, a likeness of the Statue of Liberty, Uncle Sam - anything and everything that shows how much they love America,” Horner said. “Every year I’m amazed at the fun and crazy decorations our guests come up with.” 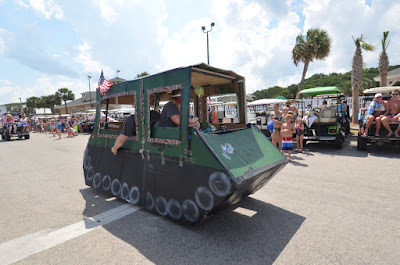 Can't make it to Ocean Lakes for the golf car parade? We'll be streaming the parade live on our Facebook page.

Salute from the Shore
What | Military flyover “air parade”
When/Where | Tuesday, July 4. Starts at 1 p.m. in Cherry Grove and ends about 1:30 p.m. over the May River Sandbar in Bluffton
Tip | The Observation Deck is a great spot to catch the flyover (but anywhere on or near the beach works, too) 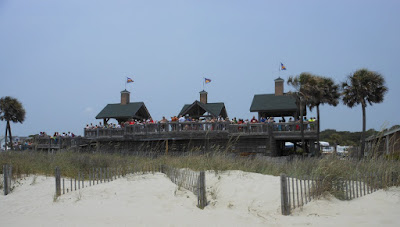 Military aircraft will zoom by Ocean Lakes on July Fourth as part of Salute from the Shore, a nonprofit founded in 2010 by South Carolinians to honor the Armed Forces on Independence Day and encourage beachgoers to show their support.

Organizers encourage folks to wear their patriotic gear as they watch the flyover, and share videos and photos showing their support of the military.

Organizers aim to distribute the tributes for the benefit of military family at home and abroad.

“Participants on the beaches are strongly urged to organize patriotic displays in groups, big and small, and to share their tributes online for our armed forces around the world to see,” organizers said in a news release.

The flyover features F-16s and vintage military aircraft. The vintage flights are dependent on weather and a variety of mechanical conditions. 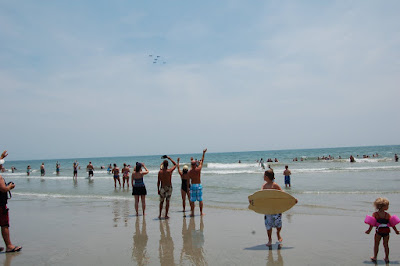 Ocean Lakes Family Campground is one of a number of businesses, foundations and others that support Salute from the Shore. Donations are used to assist the owners of the vintage aircraft with their expenses and to provide funding for video and promotional products.

Patriotic Bicycle Parade
When | 10 a.m. July 4
Where | Meet in front of the Recreation Center
Show off your patriotic pride on two wheels! Ride around the campground on your decorated bike. Sign up before 8 p.m. July 3 in the Recreation Center. Prizes to the top three winners! 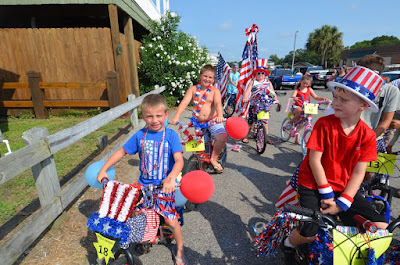 Have fun all week

We had so many patriotic events planned we couldn’t fit them all in on the Fourth. Check out the full list of activities online; many of our regular summer activities will take on an American theme during the week of the Fourth, including Amazing Race, Minute to Win It and Field Day. 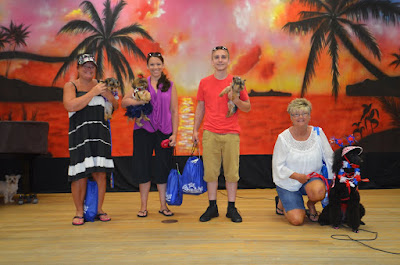 Patriotic Site Judging Contest
When | 7 p.m. July 3
Decorate your campsite or beach home with your best July Fourth gear for a chance at prizes! If you want your site judged, you MUST sign up in the Recreation Center before 4 p.m. July 3. 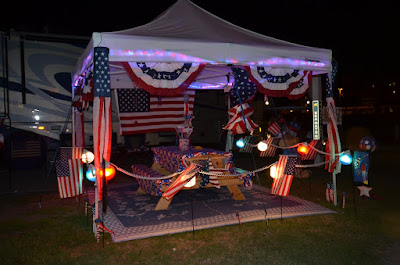 Our guests are the judges! Swing by the Recreation Center to pick up the list of sites for judging at 7 p.m. July 3 then return the ballot by 9 p.m. that night to be tallied. Only one ballot per site/family. Prizes will be awarded to Most Patriotic, Most Creative, Most Eye Catching and Best Overall.

Fireworks
We love guests to show their patriotic pride, especially around Independence Day, but remember that fireworks and sparklers are NOT allowed in the campground.

But don’t fret, you’ll have plenty of places to catch professional fireworks displays for the Fourth.

Unfortunately, nearby Surfside Beach has canceled its usual July Fourth fireworks display because of the damage to its pier from Hurricane Matthew in the fall. The town is working to rebuild the pier, but it will be at least 2019 before it's back. Though the fireworks have been canceled, the town still plans to have entertainment and live music on Surfside Drive from 6 p.m. to 9 p.m. July Fourth.


Respect each other and our teammates
July Fourth is one of the busiest weeks of the year, so expect the campground to be packed. Might want to pack a little extra patience and remember we are all here to have a fun, festive time! 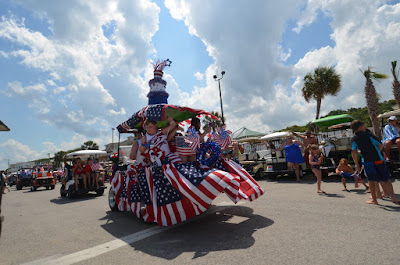