Crews will start a much-needed beach renourishment project later this month, but beach-goers will still be able to use most of the beach by Ocean Lakes during the work.
The U.S. Army Corps of Engineers announced last week that the $26.3 million renourishment project will start near the Surfside Beach Pier around July 15 and proceed up the beach to Ocean Lakes Family Campground and Myrtle Beach State Park.

The Corps set the timing of the project, which was beyond Ocean Lakes’ control. 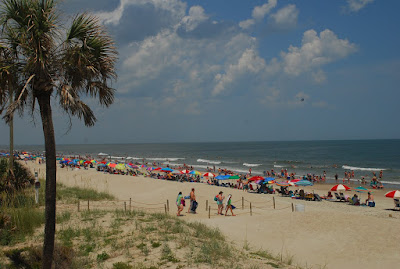 Great Lakes Dredge and Dock Co. will work in 1,000-foot-long sections that will be fenced off for roughly two or three days, then crews will move to the next section, according to the U.S. Army Corps of Engineers.

The beach by Ocean Lakes stretches nearly 5,000 feet, so most of the beach by the campground will be available to beach-goers at any given time during the work. Beach-goers may find their favorite spot on the beach being worked on and unavailable, but they will be able to move farther down the beach where crews are not working.

Beach-goers also should easily be able to maneuver around the active construction area, the Corps says.

Beach-goers can track the progress to help plan their beach outing. Officials with the Army Corps of Engineers could not pinpoint the date when the work would start on the beach by Ocean Lakes.

The project, which is needed to repair the damage done by Hurricane Matthew in the fall, should wrap up by late August. The contractor will work 24 hours a day, seven days a week and usually completes up to 500 feet a day, barring any mechanical issues or bad weather, according to the Corps.

It will take between 25 and 35 days to complete the renourishment from the Surfside Beach Pier to Myrtle Beach State Park, a section that includes Ocean Lakes, according to the Corps.

The timing of the project during the busiest time for our beaches is not ideal and is beyond Ocean Lakes’ control.

Corps officials said several factors led to the work starting in July, including the federal emergency funding that must be used as soon as possible and the availability of the dredge.

The Corps acknowledges that the construction “will cause temporary inconveniences to people using these stretches of beach for recreation. However, beginning the construction project now enables the major, long-term benefits of protecting people and property from storm damage to be realized as soon as possible,” Project Manager Wes Wilson said in a news release.

Beach-goers should use caution near the work area. Use crossover ramps to get over the pipelines that will run along the beach outside of the fenced area and stay away from lines.

Ocean Lakes has encouraged guests to stay off the temporary dunes until the renourishment could be done, adding signs to the oceanfront reminding guests as their feet hit the sand.

Once the beach from Surfside Beach Pier to Myrtle Beach State Park is complete, crews will renourish the area south of the Surfside pier to Georgetown County and then in North Myrtle Beach.

The beaches need work after taking a beating from Hurricane Matthew in the fall. The storm wiped out the dunes by Ocean Lakes and in many other parts of the beach.


“We wish it was at a different time, but it definitely needs to be done. Everybody can recognize that,” Thompson said.