A special playground in Myrtle Beach is giving children with special needs a place to play alongside everyone else – and has a special connection to Ocean Lakes Family Campground.

Savannah’s Playground, at Grand Park near The Market Common, is designed to accommodate children of all abilities, including those with special needs, so all children can play together. It also gives parents with disabilities the chance to play with their kids in a way that other playgrounds don’t accommodate. 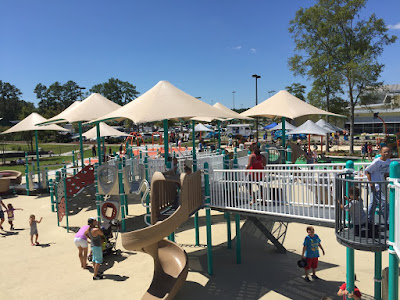 The $1.2 million Americans with Disabilities Act-approved park opened in Myrtle Beach – about five miles away from Ocean Lakes – late in the summer and has quickly become a hit with families and a model for other cities that want to provide a similar playground, officials said.

The inspiration for the city-owned park came from Savannah Thompson, the 20-year-old daughter of Lance Thompson, General Manager and Vice President of Ocean Lakes Family Campground.

“Everybody knows Savannah,” city spokesman Mark Kruea said. “You can’t help but be affected by her willpower and genuine happiness, infectious smile. And her family are great representatives of Myrtle Beach.

She’s just an inspiration to all who know her.”

Savannah has Williams Syndrome, a condition that presents developmental delays and left her with a heart defect. She had her first surgery when she was 4, but there were complications with the anesthesia that caused her to go into cardiac arrest. Savannah was oxygen deprived for 20 minutes, which caused significant brain trauma. She was in a coma for almost a month, but Savannah fought her way back.

She’s become a bit of a local celebrity: a fixture at Coastal Carolina University where she cheers for her Chanticleers and a regular performer of the national anthem at events such as the United Way Day of Caring breakfast and Miracle League games. She even graced the high-profile stage at the Carolina Country Music Fest in 2015 to accept a donation for the special park that would eventually bear her name, winning the hearts of the fans and famous performers.

“She just brightens your day,” said Ed Gruetzner, regional representative with Carolina Parks and Play, which worked on Savannah’s Playground.

During the playground’s ribbon cutting ceremony Sept. 3, Savannah – decked out in CCU teal – flashed that trademark smile as several hundred residents and visitors gathered to celebrate the opening of the park, which many experts say is the most impressive enabling park in South Carolina.

“I want to thank everybody for coming. This is a big honor for me and my whole family,” Savannah told the crowd before turning to give her big sis Chandler a big hug.

The playground has been popular with kids of all abilities since it opened – often a hub of activity during the recent nice, sunny fall days.

“We are ecstatic that individuals of all abilities, and of all ages, both residents and guests alike, will be able to enjoy the playground for many, many years to come,” Lance Thompson said. “We could not be happier that Savannah was the inspiration behind the concept, and that the playground has been named in her honor.

“At the risk of offending Disney, in our opinion Savannah’s Playground is the happiest place on Earth.” 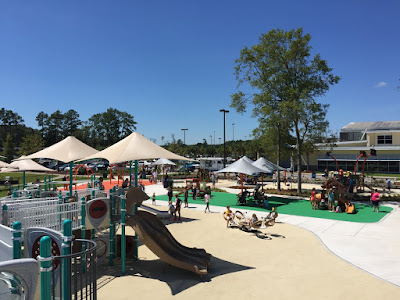 The playground has caught the attention of cities and counties in the Southeast considering building similar parks, Gruetzner said.

“This opened up a lot of eyes,” Gruetzner said. “It kind of sets the bar. It’s starting to trend now.”

“He had the idea, had the vision and put the plan into action,” Kruea said. “It is a good fit for the city.”


Lance Thompson thanked Rhodes and others for helping make the park happen.

“Our family is very grateful to Mayor Rhodes, the city of Myrtle Beach, the county of Horry, the state of South Carolina, the Air Force Base Redevelopment Authority and all the many other groups and individuals who have worked so tirelessly to make this wonderful facility a reality,” he said. 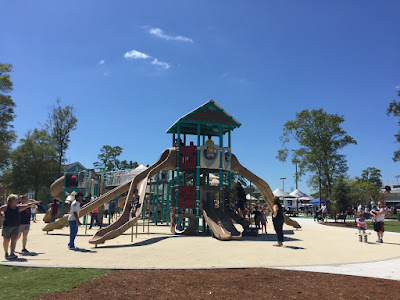 The new playground has quickly wowed residents and leaders, and more phases are in the works. The city already is planning to add restrooms and an entryway feature that will welcome guests to the park, Kruea said.

Fund-raising for future expansion is underway, though details of the next phases haven’t been locked down. Officials are considering a splash pad, more playground equipment and paddleboats.

“The playground is going to get a lot of use seven days a week,” Kruea said.

WHAT | Savannah’s Playground
WHERE | Grand Park at The Market Common, near Crabtree Memorial Gym
WHEN | Daily, dawn to dusk

Checks should be made out to Savannah’s Playground, LLC