You know the kindness rocks that have become so popular spreading love around Ocean Lakes? We’re kicking it up a notch – bluegrass style.

Three special rocks – inspired by bluegrass band Balsam Range’s hit “Stacking up the Rocks” – will be hidden in the campground Friday, the first day of our 19th Annual Premier Bluegrass Weekend. Balsam Range is set to hit the stage in our Recreation Center on Saturday.

In addition to spreading the love by channeling the band’s song, these special rocks – with praying hands, crosses or the song name on one side and Balsam Range on the other – come with prizes for the lucky ones who find them.

n  Guests who snag the rocks should bring them to our Recreation Center to claim Balsam Range merchandise and a special gift from Ocean Lakes.
n  Post a pic of them on the Ocean Lakes and Balsam Range social media pages with #stackinguptherocks 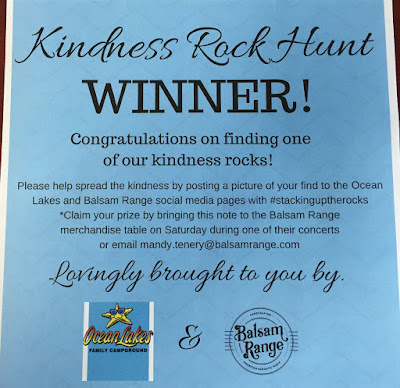 The kindness rocks movement, spreading positive vibes in cities across the country, marries perfectly with one of Balsam Range’s most popular songs, “Stacking up the Rocks.” The story behind the song is even more inspiring than the tune itself.

The band’s Buddy Melton wrote the song after miraculously recovering from a near death farm accident in March 2012.

Melton sustained life-threatening injuries after his nose, forehead and right eye socket were shattered when a cow kicked a metal gate that crushed Melton’s face.

“They had given him a really bad prognosis,” Terney said. “There was a little amount of time they didn’t even know if he was going to survive.”

His mother prayed hard. Rallied others to pray, too.

His mom pointed out that Melton made that miraculous recovery the same day as the “stacking up the rocks” story outlined in the Bible verse of Chapter 4 in Joshua. Joshua led the Israelites across the Jordan and God stopped the river from flowing. A dozen men went back and stacked up stones by the river as a memorial of the miracle that occurred.

The timing inspired Melton to write “Stacking Up the Rocks,” a memorial of sorts for Melton’s miracle that has become one of Balsam Range’s most popular songs.


See the band perform that special song Saturday as they headline the second day of our Bluegrass Weekend. Tickets for the two days of concerts are $45 in advance, $50 starting Friday.

Ocean Lakes is the first venue to partner with Balsam Range on this Kindness Rock Hunt, but be on the lookout for #stackinguptherocks at other Balsam Range shows.

“I want it to be an ongoing thing,” Terney said.
Posted by Ocean Lakes' Team at 4:31 PM