So when Ocean Lakes Family Campground announced the March Madness 22-Mile Challenge for teammates – walk every paved road in the campground in a month, a total of 22 miles – John figured he’d give it a try.

At 82, he’s a bit older than most of his fellow teammates. And, just a little more than a year ago, he had surgery to fix the left hip that he broke in a fall. “I’ve got a little wobble now, though,” he said.

But that wasn’t going to stop him.

He’d pet dogs along the way. Chat with folks on their porches enjoying the nice day. One guest, who relied on a scooter to get around, even joined John for a bit.

“He pulled up beside of me wanting to know what I was doing,” John said. They ended up talking for the next mile as John walked the mobile home section, the man rolling right alongside him.

“Everybody’s nice and friendly and they talk to you,” John said. “I had a good time with it.”

John, a retired law enforcement officer who works in Ocean Lakes Main Office, made special trips to the campground while off duty on Tuesdays and Wednesdays during March to log the miles. On his best day, he walked 3.5 miles.

Before he would set out on the day’s walk, he’d grab his Ocean Lakes walkie talkie radio – natural instinct for a law enforcement guy – just in case he had to alert Security if he stumbled upon a situation that needed immediate attention.

He’d also give his Security teammates a heads up that he was heading out for his walk. His teammates had his back.

“Bob Muller would ride by and make sure I was in an upright position,” John said.

Once John got going on the challenge, ticking off mile after mile, he started to think that his original goal of 10 miles might not be enough.

“Heck, I could crush this thing,” John remembered thinking after he finished 10 miles.

“Everybody really thought I could do it and a lot of people encouraged me,” John said.

He persevered through the aches in the knees or ankles that came after a day’s good walk. Sometimes he’d carry his cane on his walks – he doesn’t really need it to walk around every day but he thought it might help on some uneven areas.

But the biggest bummer – there weren’t many guests out and about to chat when he walked the south side of the campground.

“It was kind of lonely on the south side,” John said.

By the end of the challenge, John had logged 25.8 miles (there’s some overlap catching every road) – just shy of a marathon (26.2 miles).

“Probably no one my age has walked that,” John said of his 25 miles, which he finished walking March 28.

His accomplishment earned him the “Rock Star” medal at the April 9 luncheon in the Recreation Center celebrating the teammates who participated in the 22-Mile Challenge.

“I’m just happy I can still go,” John said. “I’m going to go until they carry me out of here.” 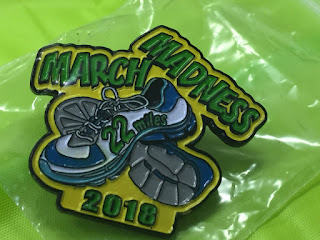