Remember that March Madness walking challenge at Ocean Lakes? The final results are in...

Like many others, Ocean Lakes HR Director Bonita Lloyd’s predictions for March Madness were way off - but in a good way.

Participation in Ocean Lakes version of March Madness – a 22-Mile Challenge for teammates to walk every paved road in the campground during March – came in way higher than Lloyd expected for this inaugural walking challenge.


Sixty-one teammates participated; 53 finished all 22 miles and 8 finished a portion. In all, teammates walked 1,486 miles in the campground last month, all while off the clock.

“This just blew my numbers out,” said Lloyd, who had expected about a dozen or so teammates to participate.
“They were having fun with it, walking together,” Lloyd said. “They certainly were having fun seeing the property.”

Some teammates embrace any challenge. Some started off willing to walk a few miles but realized, “Hey, maybe I can pull off the whole thing.” For others, it worked right in with their New Year’s resolution to lose weight and be more active.


LeeAnn Halsema, a Recreation Supervisor, started 2018 on a health kick – and the 22-Mile Challenge just pushed her even more. She hadn’t run a full mile since graduating from Coastal Carolina University in spring 2017, but she did during the challenge. Other times, she’d walk five miles in roughly 90 minutes.

“I didn’t realize I could do it,” Halsema said. “Oh my god – it was amazing. The challenge made me push myself more.”

And she’s looking great, too. Halsema has lost 52 pounds since January, and the pounds keep coming off as she continues to keep an active lifestyle.

Compliance Officer Terry Hill, a regular walker anyway, set out to knock out the 22-Mile Challenge in just a couple of days. The first day of the challenge, Hill walked before work, during his lunch break and after clocking out that afternoon, racking up about 10 miles. He paced himself over the next week to be one of the first teammates to finish – encouraging his teammates along the way.

“I got the word out there, let’s pick it up,” Hill said. “I thought it was a good idea, and I wanted to get it done.”

Teammates who walked the 22 miles – nearly everyone ended up with more miles because of the overlaps as you hit every paved road – earned 2,200 points in the company’s wellness program, which helps them pay less for health insurance. Teammates who earn 7,000 points a year pay the least amount for their insurance.

The points motivated some teammates. Didn’t matter at all for a few part-time teammates who weren’t eligible for the points but walked the paved roads anyway. 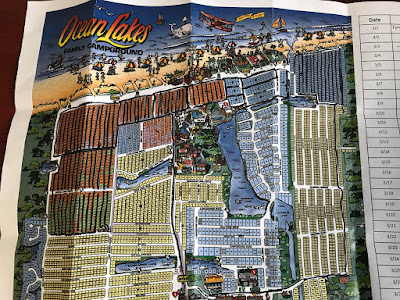 Guests cheered teammates on as they saw them walking up and down every road. Even some guests wanted to get in on it, asking for the same map teammates were using to mark off the roads as they walked them.

“I love the way the guests got involved and engaged in it,” Lloyd said.

Even teammates who are out and about in the campground every day for their jobs saw nooks and crannies in the park that they had never stumbled upon during their daily duties. Halsema – who is around the park a lot gathering campground-related questions for our Amazing Race game in Recreation – saw new things on her walks with her trusty sidekick Tucker, a chocolate lab.

“And there were still houses I hadn’t seen,” Halsema said. “It’s definitely a different perspective.”

Teammates who participated were treated to lunch – a healthy salad from the Meet n’ Eat – in the Recreation Center on April 9 to celebrate. They also received a March Madness 2018 pin. 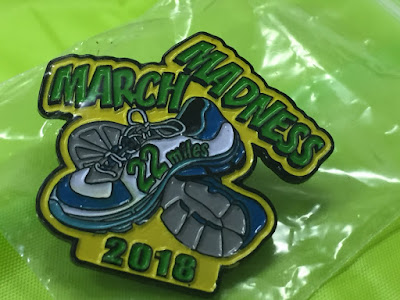 The March Madness Challenge was such a hit, expect to see it back next year. Lloyd and the HR team are already cooking up another active challenge to complement the weight loss challenges and Lunch and Learns that also are part of the teammate wellness program.

“It definitely got everybody ramped up on a healthier lifestyle,” Lloyd said. “Hopefully, it will stick.”